By blending traditions of the past with the opportunities of the future – we strive to grow our faith in Jesus Christ as our Savior – with our congregation, our neighborhood, and our community.

Know Someone In Need?

First Presbyterian hosts the Food Pantry the third Thursday of every month! Click here for information.

First Presbyterian Church of Ottumwa, Iowa, was organized in 1853. At that time, Ottumwa was a frontier town with a population of about 600 persons.

A group of women successfully petitioned the Presbytery for permission to organize a church in Ottumwa. A committee met on December 21, 1853, for the purpose of establishing a church.

On December 24, 1853, the congregation met at the old Court House at Market and Third Streets, prayed, and elected three ruling elders: W.L. Orr, M.D.; John Hite; and John M. Taylor. The purpose as stated in the Articles of Incorporation was “to promote the Christian religion in its doctrine, government, discipline, and worship.” The congregation met at the courthouse and, for 18 months, preachers were supplied by the Presbytery of Des Moines at irregular intervals.

The first permanent pastor was Rev. John M. McElroy, who arrived in July of 1885, and served the congregation and the community for 14 years. During his pastorate, the church members purchased a lot on the corner of Green and Fourth streets and, for a cost of about $7,000, built a church there. They met there until it was destroyed by fire in 1919.

A church was then built at Fourth and Washington streets. It was designed by William Foster of Des Moines and was considered a fine example of ecclesiastical architecture of the 1800s.

Ground was broken at the present site at Fourth and Marion streets on March 1, 1926, for a new church. Construction took just over a year and the church opened on May 1, 1927. The approximate cost, including an organ and other equipment, was $239,000.

OUR LEGACY CONTINUES…
As we look back on the church’s history, we realize that many changes have taken place over the years. However, one thing has remained constant: our congregation’s love for and faith in Jesus Christ and will remain unchanged.

With that in mind, the Evangelism commission, in 2001, established the following vision statement for the church:

of the past with the opportunities of the future,

we strive to grow our faith

in Jesus Christ as our Savior—with our congregation,

our neighborhood, and our community.”

Putting our
DEVOTION IN MOTION 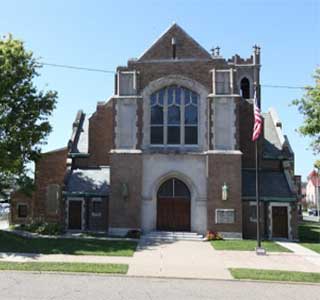